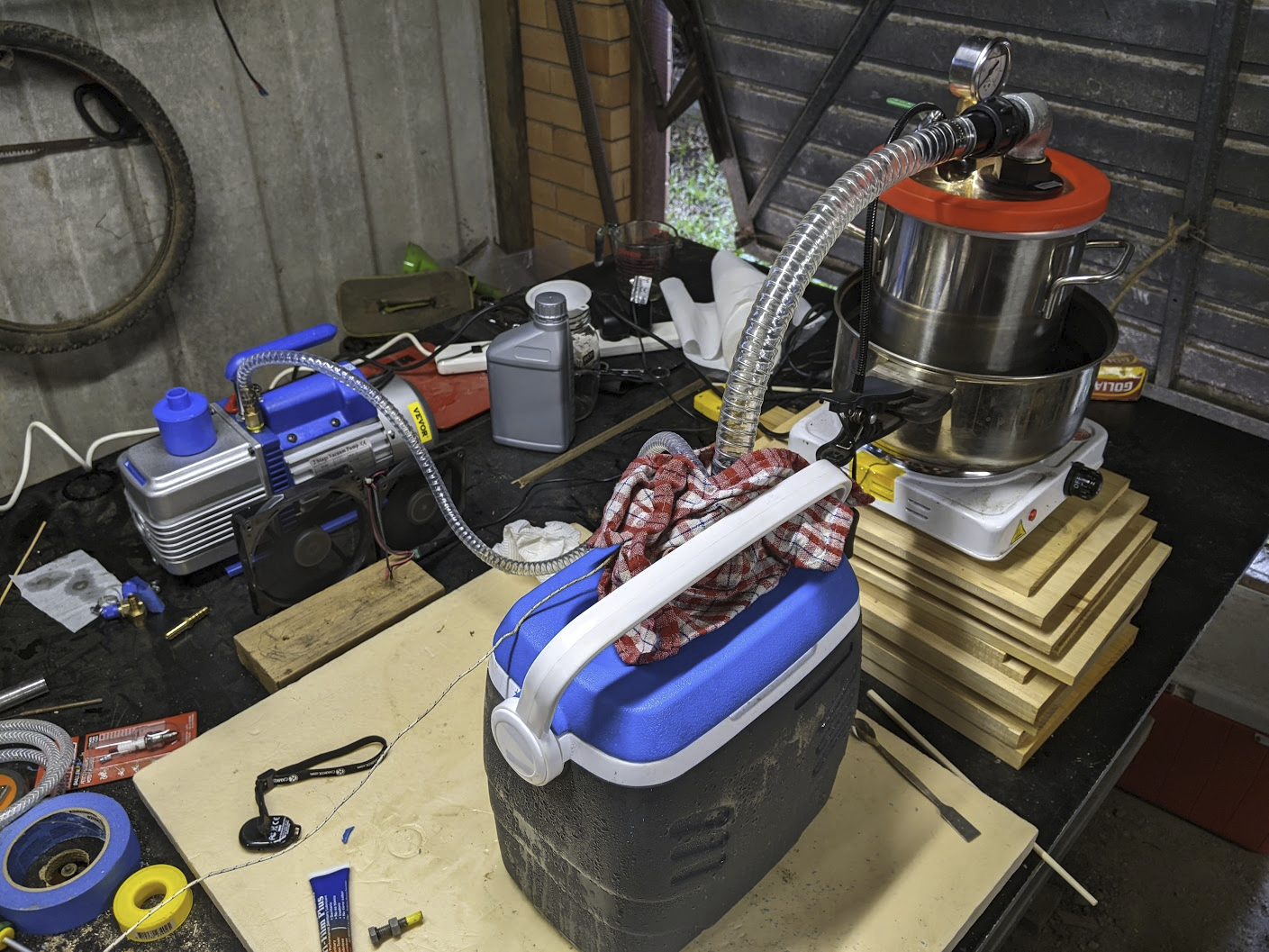 The main improvements over the last attempt were to increase the diameter of the pipe between the cold trap and the vacuum pump, and to improve the quality of the vacuum.

I bought new fittings for the vacuum pump with fewer narrow points along the path, and installed a bigger passthrough to the cold trap lid. It was hard to identify the thread on the body of the vacuum pump. I eventually worked out that it was a 1/2“ BSP. I couldn't find a 1/2” to 10mm barb fitting, only a 1/2“ BSP to 1/4” BSP and a 1/4“ BSP to 10mm barb. Not ideal. Scope for improvement here, but I don't think it's a huge factor.

Soon after receiving the vacuum pump I ordered some vacuum oil, knowing I'd need to replace the oil in the pump sooner or later. I figured I would drain the factory oil in the pump and replace it with the new stuff. The nameplate on the pump stated it should hold 370mL of oil. I turned on the pump and let it run for a while to warm up its oil, then turned it off and removed the fill and drain plugs. About 20mL of oil came out.

The oil level in the sight glass was about 1/3 from the bottom, and this level did not change when I drained the oil out. The oil was trapped against the glass by capillary action, and the pump had been running nearly dry for 25-30 hours. Not good. I poured in 370mL of the new vacuum oil and the level on the sight glass did not increase. I poured in about another 50mL until the level was halfway up the sight glass. The quality of the vacuum improved from around -0.98 bar to below -0.99 bar. The pump also ran much cooler.

In an effort to waste less food and have less water to extract I only put in one thick slice of kiwi fruit and half a dozen blueberries. I forgot to take a photo, so here's DALL.E 2's impression. 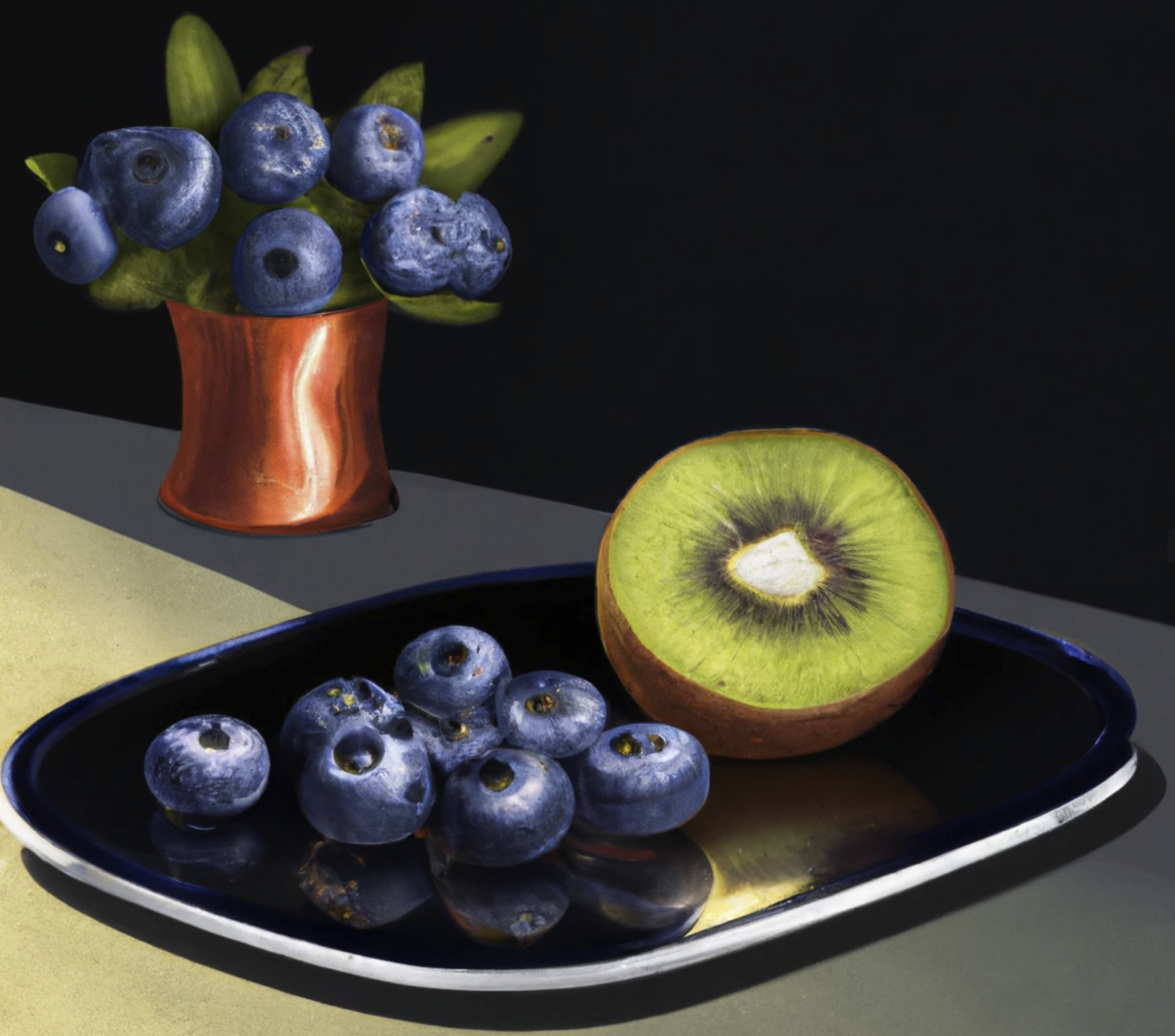 I pre-chilled the food in the dry ice box before beginning. I set up the system with the food chamber in a water-ice-filled esky for the first 1.5 hours, then moved it to a 50°C water bath. About three hours after the start I noticed the blueberries had burst open and the insides were foamy. 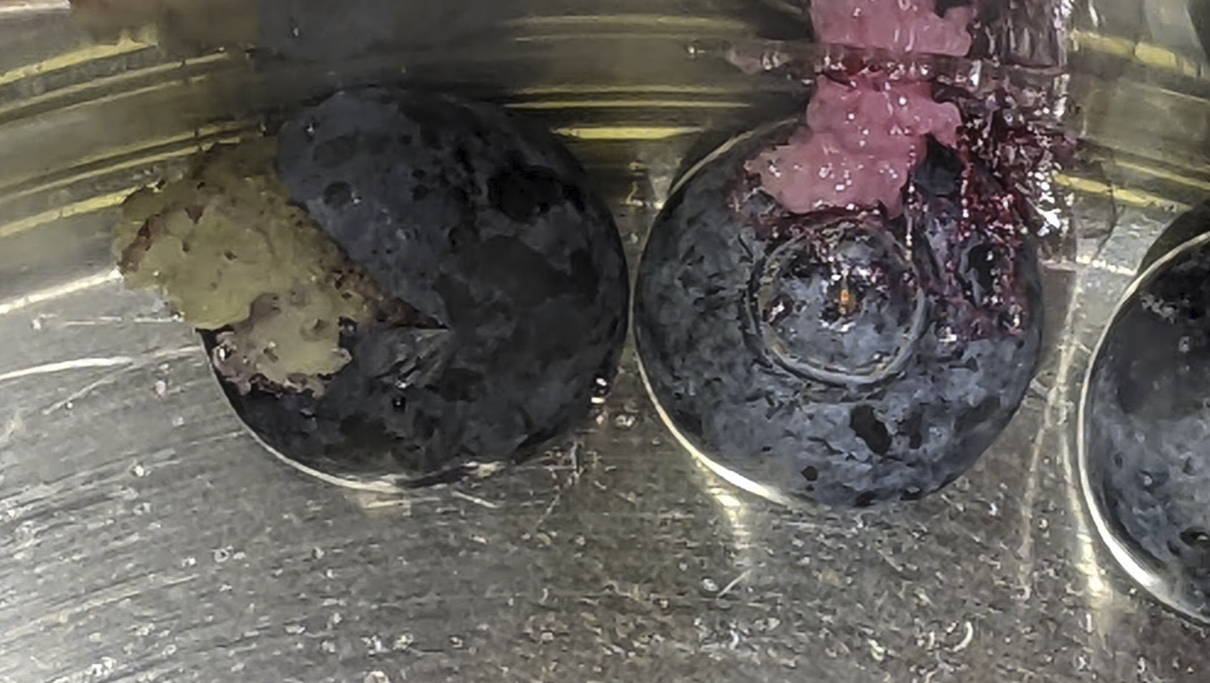 A small splatter of blueberry juice is visible, but it had dried up. 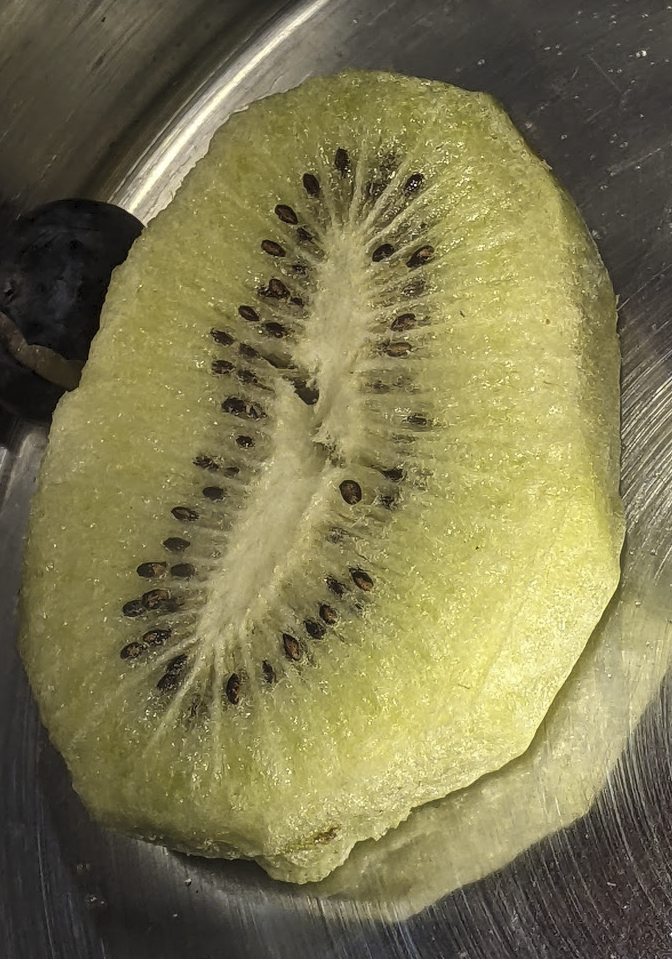 The kiwi fruit developed a split across the middle. Frost forming in the cold trap. 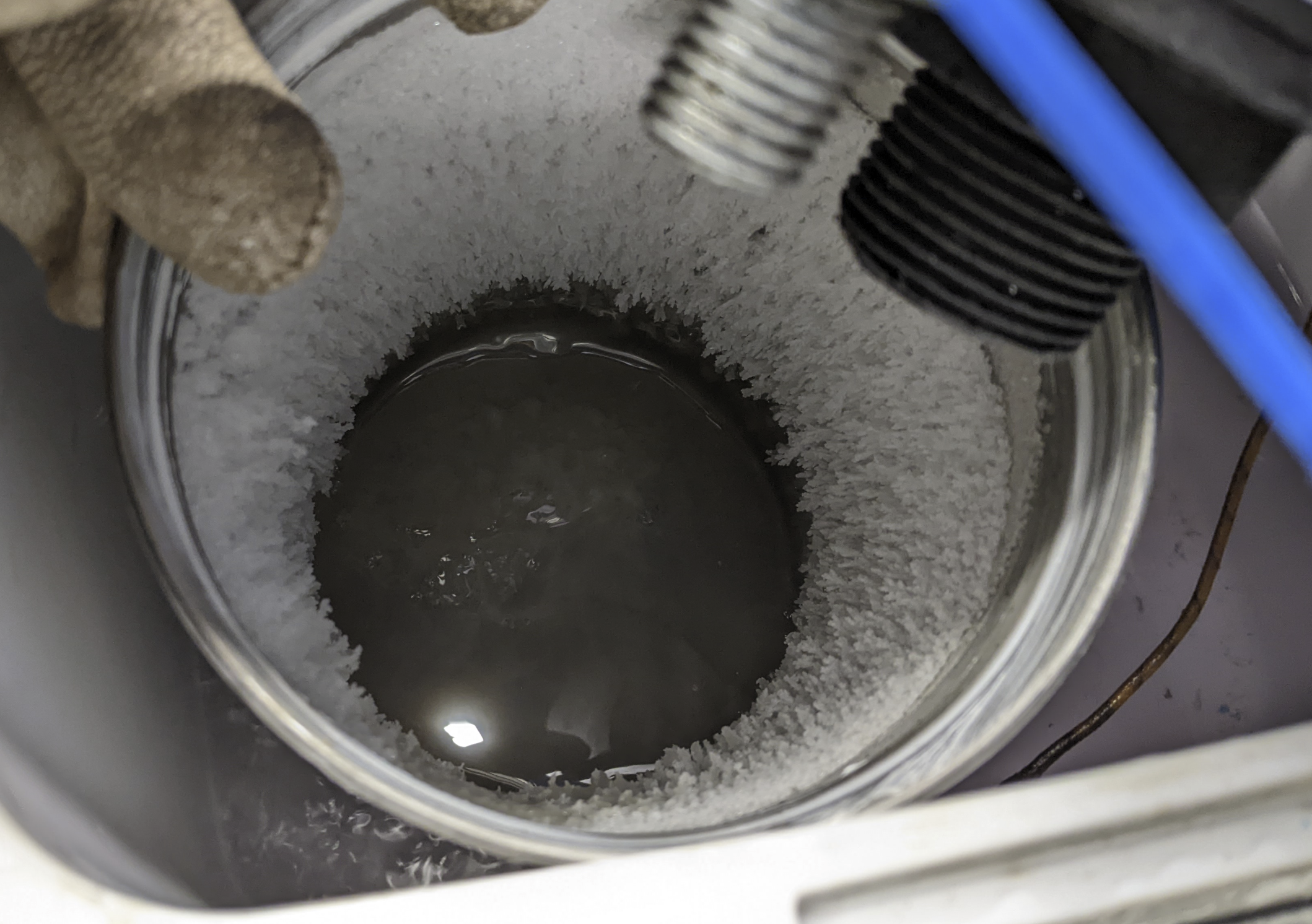 Vacuum oil in the cold trap.

I disassembled the pump to try to work out whether it had been damaged by running with insufficient oil. I couldn't find any significant damage inside, just a bit of wear. I think the motor has a thermal cutout, as it started up again by itself after a short time of being off. 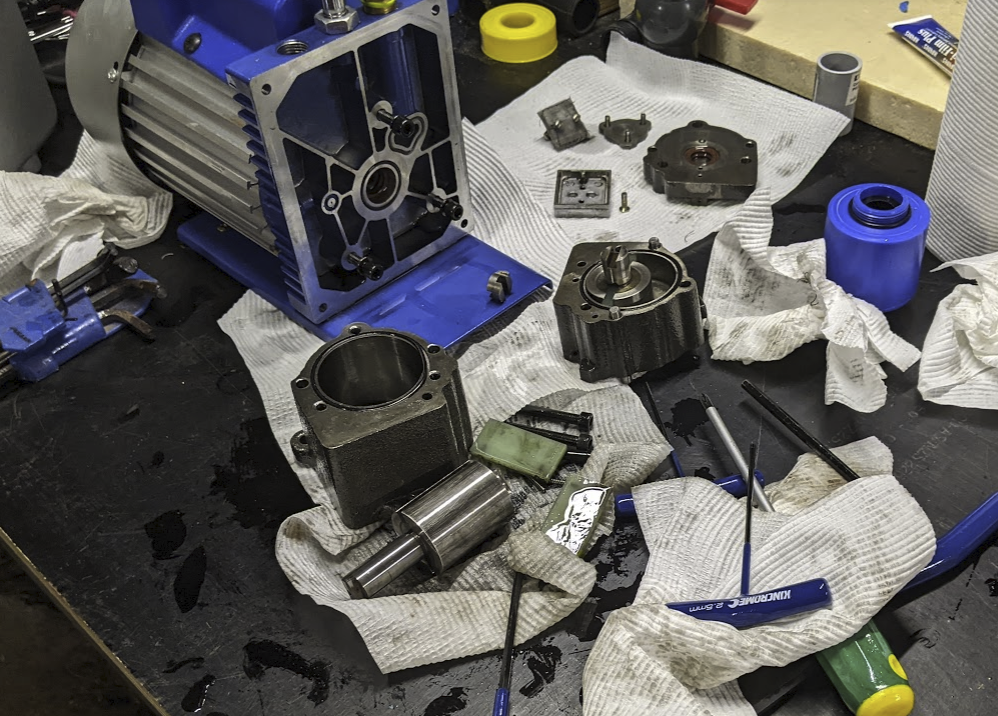 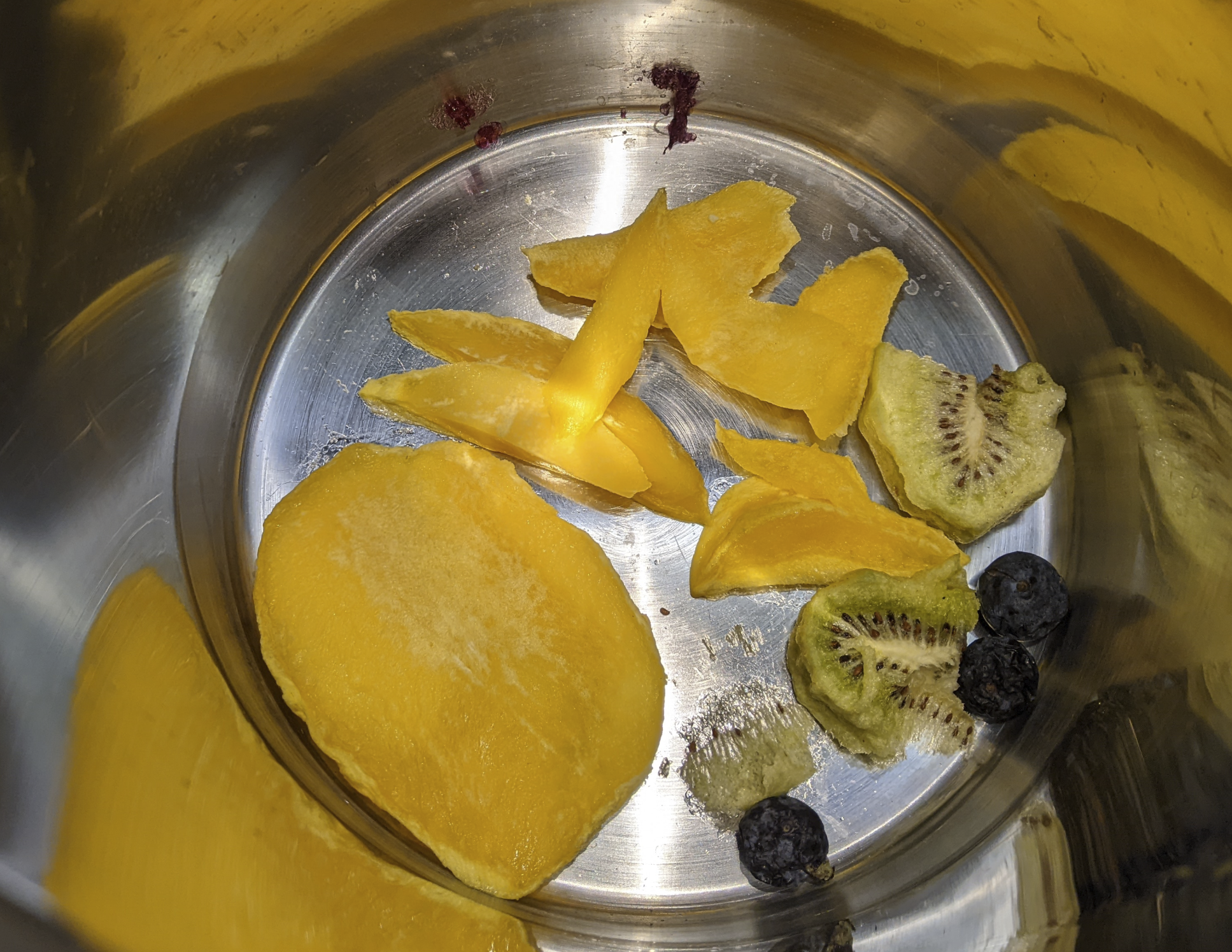 The food in the chamber when the pump failed. We fed it to the possums.

Heating the food is necessary to drive the sublimation of the ice into gas. Heating the food from the bottom works, however the top of the food dessicates normally rather than vacuum-drying like the heated bottom. I want to shine some infra-red radiation onto the food to heat it from above. I ran a tungsten-filament floodlight bulb off my benchtop powersupply at 31.8VDC, however this only gave off a dull glow. 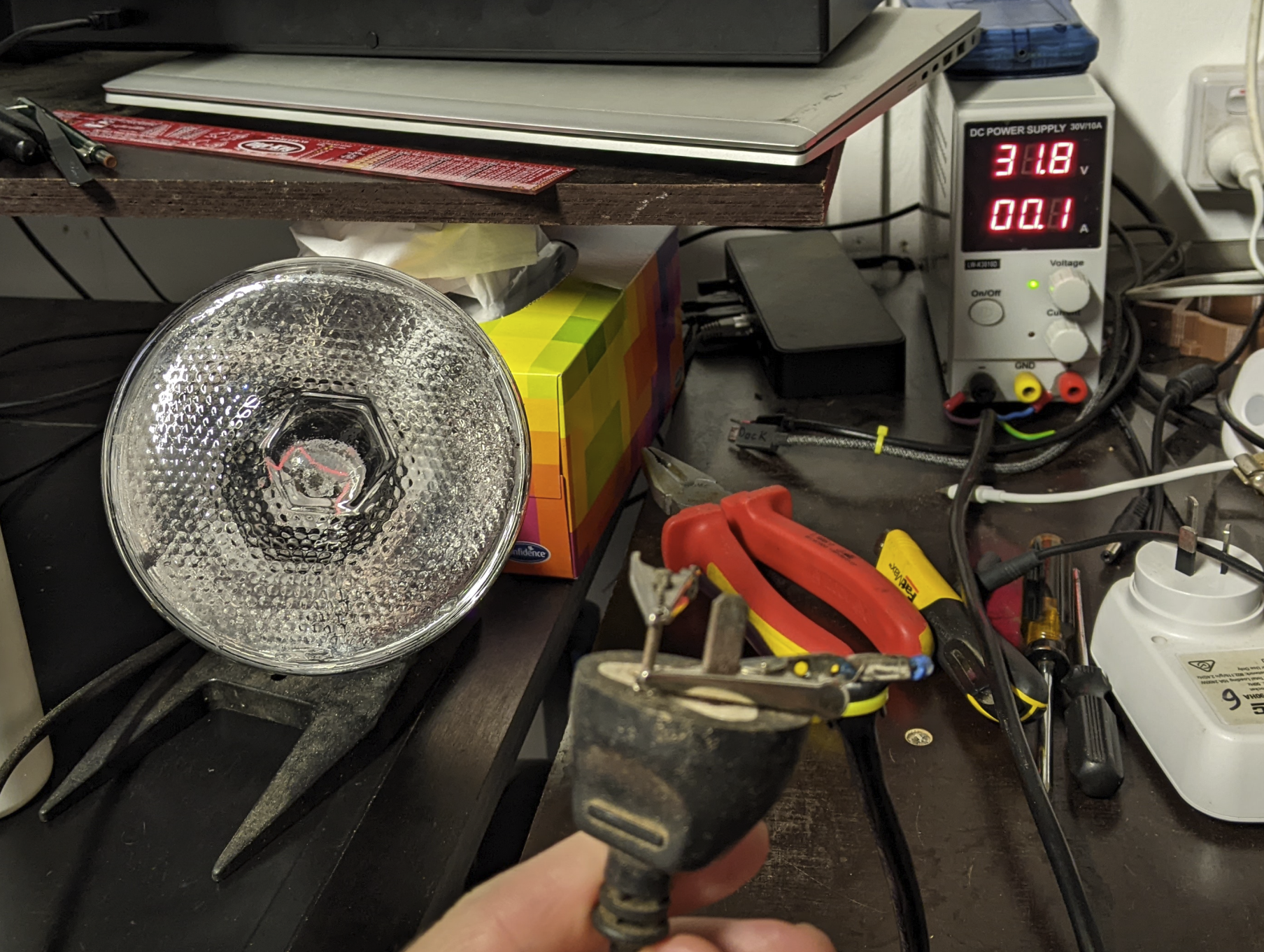 Safer than it looks.

I had good success with some nichrome wire. Ideally I could build some kind of rack system that interspersed layers of food and heating elements. 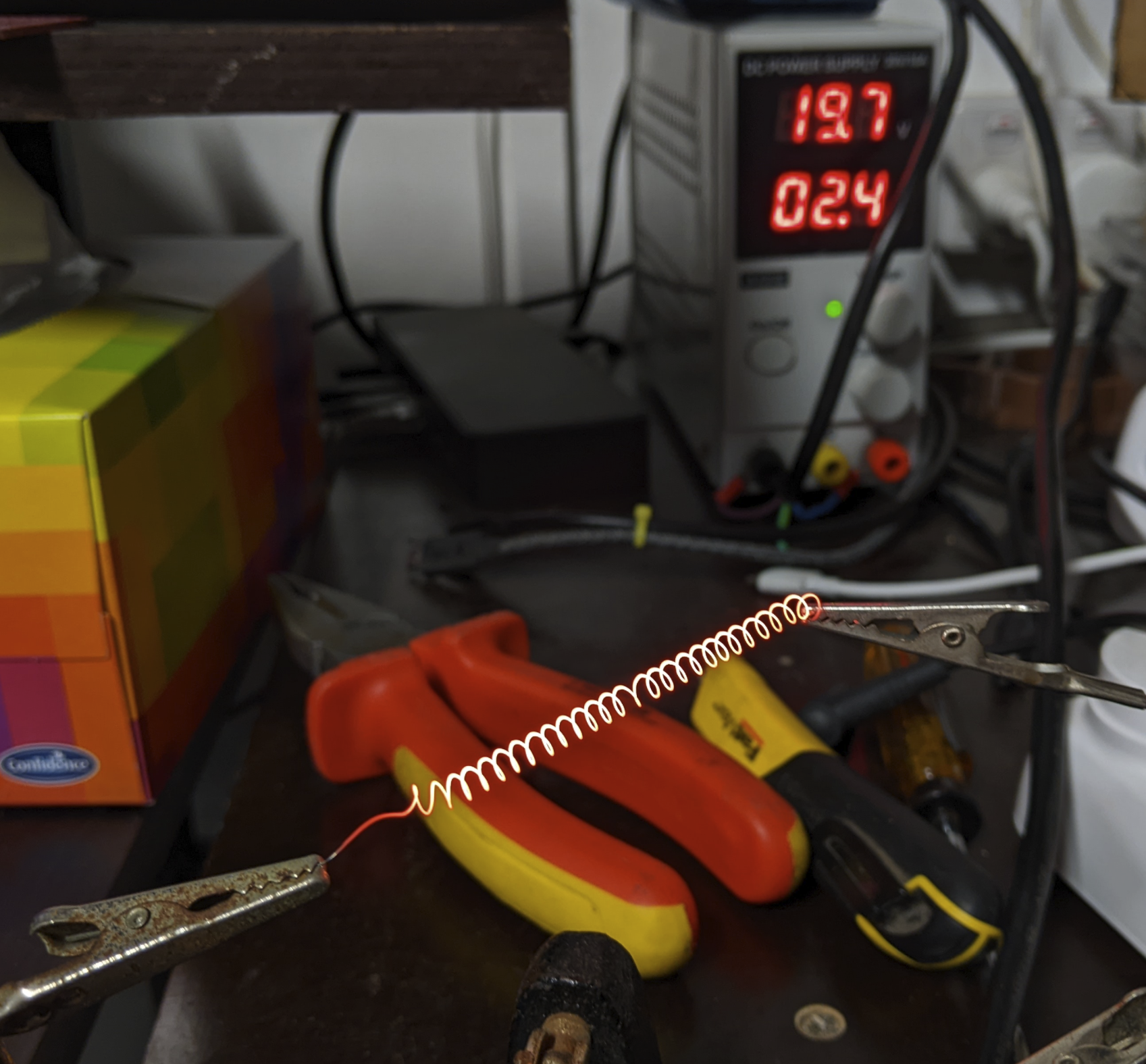 Giving off lots of IR.

Building this IR heating system would take too long to implement before my dry ice disappeared. Maybe next time.

Once I'd rebuilt the pump and got everything up and running again I put in some 10mm thick mango slices and ran it overnight. The result was delicious vacuum-dried mango slices! 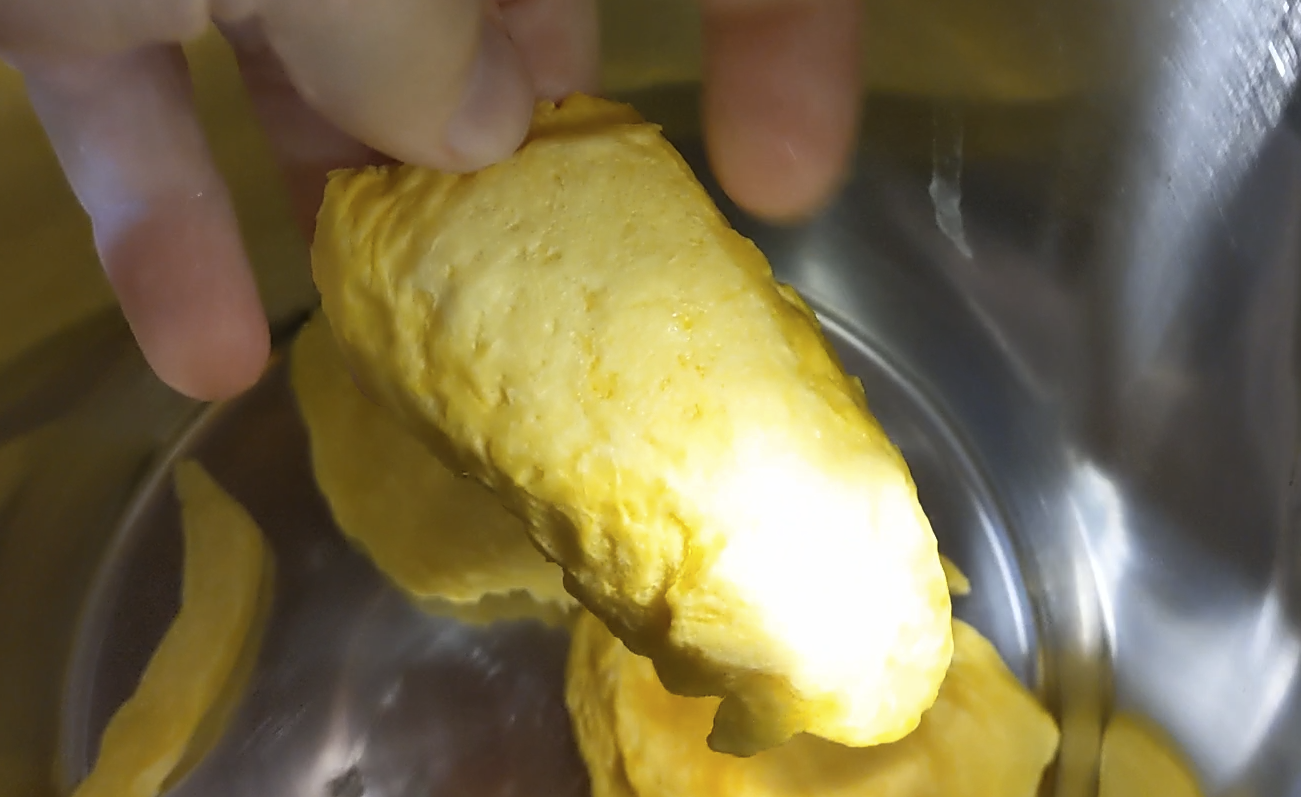 The texture was definitely crispier on the bottom, where the food could absorb heat from the pot. The top side was chewier, more like sun-dried food. I weighed the cold trap afterwards and it held 105g of water. I did not weigh the fruit before I put it in, or after I took it out. That would've been helpful.

The next step is working out how to get heat into the food uniformly and in a controlled way. I essentially need a toaster inside the vacuum chamber. A rack to hold the food and heating elements to radiate IR onto it.